For many photographers, Instagram is a fundamental tool in their marketing and promotion efforts, acting as a portfolio, and occasionally even replacing their reliance on having a dedicated website to show off their work.

But Instagram is changing, and the latest version seems to serve up video, after video, after video. The platform’s algorithm has been updated whereby priority is being given to short clips instead of posts from people you follow. You’re likely seeing a lot more ads than you’re used to. It’s also making it more difficult for users to mute videos. The ability to tap a video to mute it appears to have gone, and tapping now pauses the clip. But, if you’ve got an older version, you’re unaffected. 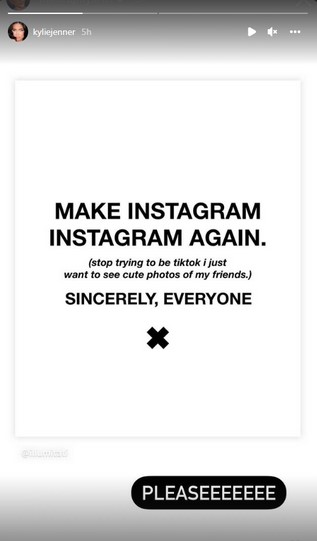 A post shared by Kylie Jenner to her
361m followers.

So why this huge swing towards video? TikTok, the platform’s main rival is video only. But users are not impressed, and recently celebrity Kylie Jenner, the third most-followed person on Instagram with an impressive 361 million-plus followers, was amongst thousands criticising the move and sharing a graphic calling to “make Instagram Instagram again”. The original post from @illumitati, who has 325,000 followers, was liked over 2 million times. A petition on Change.org has also attracted 230,000 (and counting) signatures.

Earlier this week, 39-year-old head of Instagram, Adam Mosseri responded to critics and indicated that the shift to video was not going to be replaced. "If you look at what people share on Instagram, that's shifting more to videos over time," he said.

So, if you rely heavily on Instagram to have your work seen and try and generate business, you might need to rethink your strategy and consider uploading much more video content going forward.