Described as a an intergalactic adventure in photo making, the conceptual photography of Robert Earp focuses on the ‘surreal realness’ of transgendering with his current exhibition. Named after Earp’s ‘divalicious’ artist/collaborator/muse – and featuring the sometimes-salacious and ever-sassy wordplay of Ian Buckland – the true story of Venus Virgin Tomarz is told in hyper-colourful composite photographs that recall the sci-fi kitsch of yesteryear. Think Barbarella-meets-Flash Gordon-meets-Dune. Entire galaxy and epic encounters have been created in minute detail, using everyday household items as their building blocks.

In Venus Virgin Tomarz’s universe, the stars are bicarbonate soda, mixed spices or a sprinkling of chalk dust; the moon is a swirling pour of beer; a Kitchen aid blender whips up tornadoes; and the flesh of alien robots comes from the fish in Earp’s tank.

Nothing is as it appears but, once you metaphorically scratch the surface, these very analogue methods come together to pose profound futuristic questions that affect us all (whether goddesses or otherwise). Where are we going and how are we getting there? Will we be able to accept each other in whatever guise we appear? 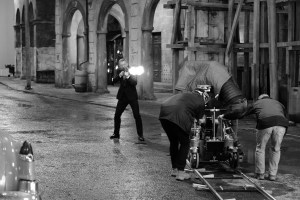 No Time to Die – Behind the Scenes (group exhibition)

A new exhibition at the Leica Gallery Sydney, No Time to Die – Behind the Scenes, features behind-the-scenes photos captured during the making of the latest James Bond movie.